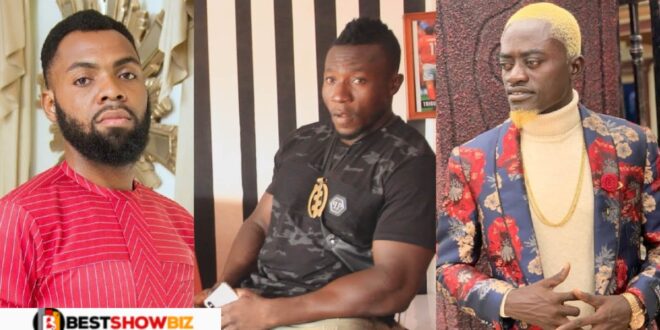 Video: ‘I was given a bribe of GHC5000 to K!ll a woman’ – Former bodyguard of Rev. Obofour and Lilwin reveals

The former bodyguard of Rev. Obofour and LilWin has revealed a shocking story about being offered a GHC5000 bribe to kill a woman.

In an interview with Prime Page, the former celebrity bodyguard known only as Rock stated that he has worked with the Rev. Obofour, Lilwin, and some MPs and that their line of duty is to protect these people from anything that poses a threat to their lives.

In addition, Rock stated in the interview that a woman contacted him through a friend and asked him to take the life of a friend to whom she owed a sum of GHc100,000.

In Rock’s words, he was offered an amount totaling ghc5000, with ghc2,500 being paid in cash on the spot and the remainder being given to him after he completed the job.

In response, he took advantage of the offer and informed the police, who, based on voice recordings, arrested and detained the woman and sent her to prison.

watch video of the interview below;