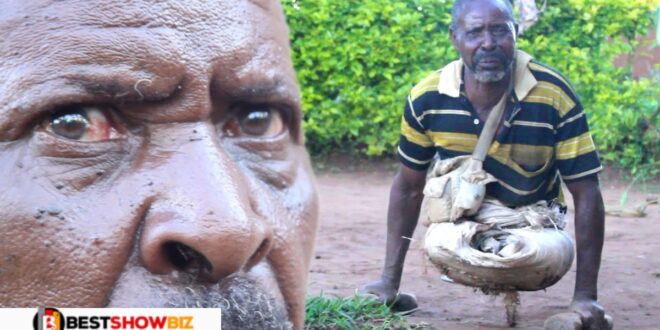 Video: ‘I paid doctors to end my life after losing my legs in the accident’ – Man shares sad story

As a man who lost his legs in an accident has described, life is difficult when one of the most important parts of the body is gone.

He claims that he met the love of his life in his wife, and that they married and had four children as he narrates his narrative.

As he was crossing the road on his way to work, he was knocked by a speeding truck driver.

The driver sped away and fled when he understood what had transpired. This had been a particularly bad day for him.

He was taken to the hospital, where surgeons were forced to amputate his legs due to the severity of his injuries.

His wife hurried to the hospital, sobbing, after learning of his condition. She was taken aback to witness a man who had been a breadwinner before being crippled.

The patient finally opened up to the doctor a few days later when he asked for payment on his hospital bill, confessing his desire to avoid being a financial burden on his family as a result of his condition.

If he gave the doctor the money he had, the doctor promised to inject him and end his life.

Someone in the room overheard and ran to tell his wife about her husband’s plans as soon as they finished talking.

She rushed to the hospital, crying, to prevent him from carrying out his threat. They returned home after she paid the hospital bills.

Considering his wife’s profession, he claims that life has been difficult because he has to beg for food on the streets.

He is now appealing to anyone who cares about him to give money toward the purchase of a wheelchair in order to help his wife afford the school tuition for their children.