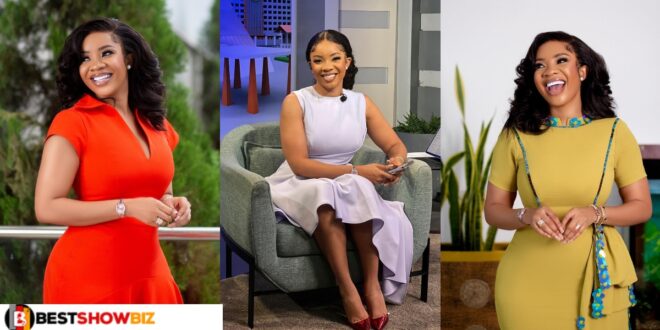 Video: ‘I need a man to take care of me’ – Serwaa Amihere speaks out on live TV

Nana Aba Anamoah’s Goddaughter, Serwaa Amihere has sparked outrage on social media after declaring that she requires a man to look after her.

The GHOne TV presenter’s remark is a mash-up of Moesha’s infamous Amanpour comments, which sparked outrage in the country many years ago.

Serwaa made hers in a lighthearted manner during a segment on her show, prompting a wide range of reactions to her remark.

Serwaa Amihere was speaking with a guest on her GhOne TV show Gh Today on the topic of relationships, specifically how men treat women while dating.

One of the gusts was making a comment about women being self-sufficient.

He claims to know that there are women out there like Serwaa who are self-sufficient and do not require the assistance of a man.

Serwaa Amihere quickly corrected him, saying she had never said anything like that.

She quickly retorted that she requires the care of a man and that she is not an independent woman.

Serwaa claims that if you buy food for her all day, every day, she will eat, but that does not mean she is reliant on you.

“I need a man in my life…” Serwaa responded, “I do,” when the guest insisted she did not need a man to look after her.

Read Also  My chains can buy Uber car, they are not 'Alumi' - Fameye claims in new video