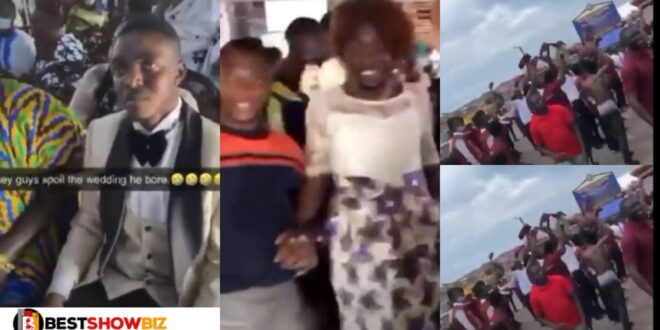 VIDEO: Groom angry with his KNUST Hall mates after they scattered his wedding with the Conti Tradition

The wedding of a member of the Kwame Nkrumah University of Science and Technology’s Continental Hall has been ruined by his peers.

The groom organized his wedding in such a way that his buddies would have no idea when or where he was being married.

The Continental Hall arrived suddenly when he was in church saying his marriage vows, much to his astonishment.

They invaded the chapel to show their custom, despite the presence of the minister and family elders of the groom and bride.

The groom frowned on the video, but it didn’t stop his buddies from showing.
They accompanied them to the reception after the church wedding to continue the Continental Hall antics.