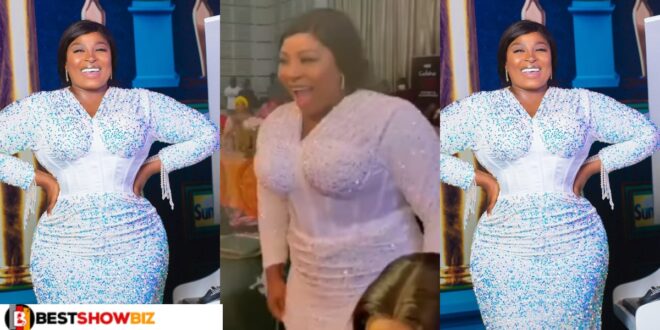 Video: Gloria Sarfo displays her huge front and back good in a tight dress

Gloria Sarfo, an actress, has sparked outrage on social media after a video of her in a skin-tight dress surfaced.

The actress showed up dressed to kill at a recent event to accept an award.

She wore the tightest dress she could find, leaving no room for her massive body parts to breathe.

Gloria Sarfo’s huge chest and backsides were crammed into the dress, drawing attention to herself and the rest of the audience.

She appeared to have made a deliberate decision to wear this tight dress, and the results were obvious.

The video, which was shot at the “Women’s People Choice Awards Africa,’ was shared by Sarfo herself.

Gloria received an award at the program and caused quite a stir simply by walking from her seat to accept it.