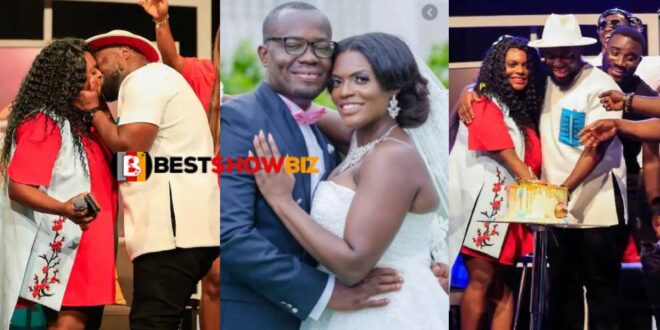 Video: Giovani and wife chops love on live TV as they mark their wedding anniversary

Giovani Caleb, a TV3 broadcaster, was surprised by his wife, Belinda Boadu, on their wedding anniversary.

On May 28, 2016, Giovani and Belinda celebrated their five-year wedding anniversary with a stunning ceremony.

Giovani hosts Showbiz 360, an all-around entertainment show on TV3, on his wedding anniversary, which occurred on Friday.

While everything was going live on television, Belinda decided to pop into the show to celebrate their wedding anniversary.

Belinda is seen arriving onto the stage with gospel musician Joe Mettle holding a birthday cake behind her in a video obtained by Bestshowbiz.com.

Berla Mundi and others on the show pushed the duo to kiss as soon as she took the stage, which they did passionately.

Read Also  Bulldog replaced with A plus on united showbiz by UTV.

The couple cut their anniversary cake with the aid of others, with people surrounding them cheering them on and Joe Mettle singing for them.

Giovani, astonished, inquired about their children.