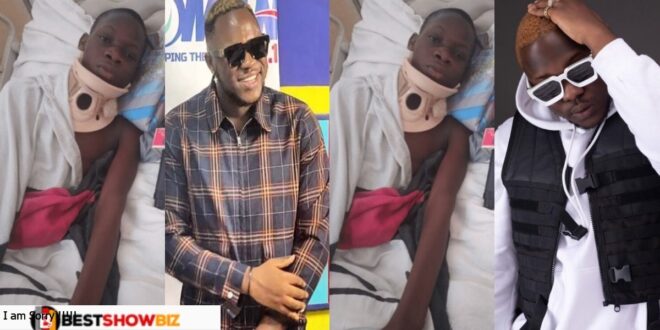 Frank Arhin, a fan who was seriously injured at Medikal’s Sowutuom concert on December 3, 2019, is seeking financial help to undergo a second surgery.

Large speakers fell on the young man and other fans of the rapper during the event, causing serious injuries to them.

Shatta Wale, DJ Switch, and other acts performed at the Kwashieman School Park in Accra for the Welcome to Sowutuom concert.

According to Ghanaweb, the speakers collapsed while Shatta Wale was performing.

Frank Arhin, who is currently being treated at the Korle-Bu Teaching Hospital, told Crime Check TV’s Ibrahim Oppong Kwarteng in a recent interview that he has been suffering excruciating pains since the incident.

While Arhin has confirmed that he has undergone the first of two operations funded by Medikal, he has also confirmed that the operation was abandoned after it took place.

During his interview, the 19-year-old also revealed that he had developed bedsores as a result of his prolonged hospitalization and that doctors had recommended that he travel outside of Ghana for the second operation.