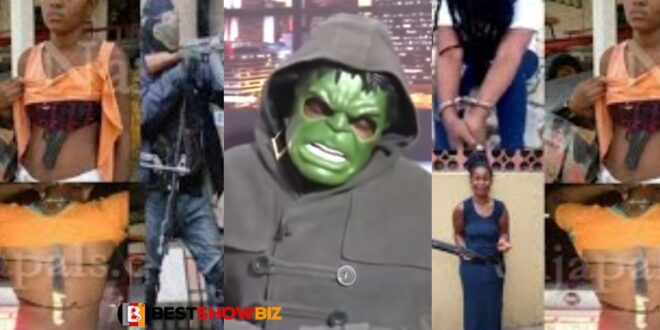 Video: Former female armed robber narrates how they operate in banks and other places

An armed robbery victim has given her tale about how they operate in banks, residences, and other locations. The lady claims she traveled to Cote d’Ivoire with her grandmother when she was five years old. She fled her grandmother’s house after being mistreated by her grandmother.

According to this lady, one of their neighbors, who normally provides this lady with food, raped her when she was 14 years old, but the grandmother did nothing.

she became an armed robber as a result of prostitution when she followed friends.
she revealed that she injects her male clients with sleeping pills or puts them into the person’s drink or water and takes the man’s money and phone after he drinks it and falls asleep. They grew hooked on these acts and began committing robberies as a result.

Speaking on how they rob people’s houses and banks, She stated that there were six women participating in the armed robbery and that when they went inside a house to rob it, they used a sewing awl to unlock doors and wore socks over their shoes so that no one could hear their footsteps.

And the banks, too; one of the ladies in their group will go to the bank and appear to be withdrawing money. She will be conversing with customers at the bank while the lady keeps an eye on individuals who have come to withdraw money.

She will then follow one individual and engage in conversation with them.

The other members will also be waiting for her with a motorcycle, so as soon as she calls them, they will assault that individual.

They met another gang of nine guys and joined forces, carrying on with the heist. They went from Cote d’Ivoire to the Ghana border, where they robbed individuals traveling from Ghana to Cote d’Ivoire.

They killed many people as a result of the heist, but she now regrets all she has done. she made all these revelations while speaking in an interview on RTV’s Ka Ma Me show.

watch the full video of her interview below;