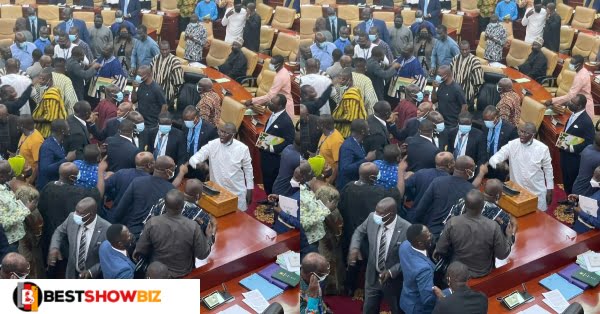 The Ghanaian parliament was in disarray as MPs got into a heated debate over the minority’s appeal to overturn the decision to approve the budget for 2021.

After the second deputy chief speaker, Honourable Joseph Osei Owusu, rejected a motion to overturn the 2021 budget that was presented to parliament, the minority is said to have started an argument.

As stated by the minority, the budget had numerous issues, one of which was the fact that a woman alleged to be a fake Adwoa Sarfo sat in for her while she was aware of the situation.

Also, they added that if the second deputy speaker was acting as speaker of parliament while Algan Bagbin was away, he should not have voted as an MP.

Read Also  He was full of life: Video of mûrdéréd Gym Instructor working out surfaces

Speaking about the issue, the Honourable Joseph Osei Owusu revealed that he is also an MP who can vote on issues when necessary.

As the NDC MPs were whisked away from the speaker’s seat, the deputy speaker’s words sparked a heated debate.