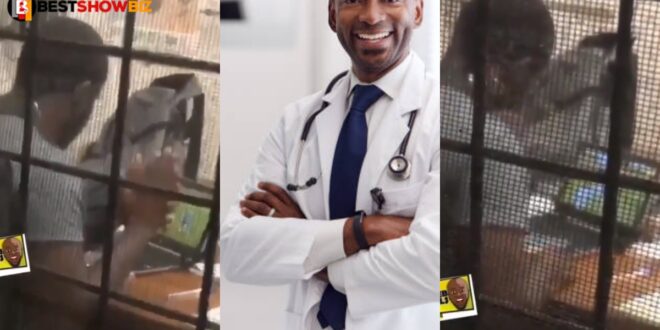 A video has surfaced on social media showing a medical practitioner at Accra’s Children’s Hospital preferring to watch his club, Manchester United, play over caring for little patients.

The doctor, who appears unconcerned with patients at the hospital, is shown in the video watching a football match at his office as patients await.

Wisdom Ekui, a Facebook user who posted the video on the social media platform, stated:

“State of the country we live in* A doctor asked me to wait outside after another patient had just come out of the consulting room.

I and my wife with an ill one-month-old baby waited patiently for a while but then, after running out of patience decided to check what exactly was keeping him from attending to us…This is what I saw.

A United fan who chose pleasure/entertainment during working hours at the expense of vulnerable ill citizens cued up to seek medical attention.

One of such was a mother who had a 2-month-old baby with blood in his stool and many others.

The least said about the hospital the better. It won’t be the first time as I have experienced many deceased children anytime I have visited that hospital and this right here could be one of many reasons why kids lose their lives over nothing serious but because proper attention wasn’t given.

These Government institutions need proper checks because it’s like we have been left to die and no one cares“.