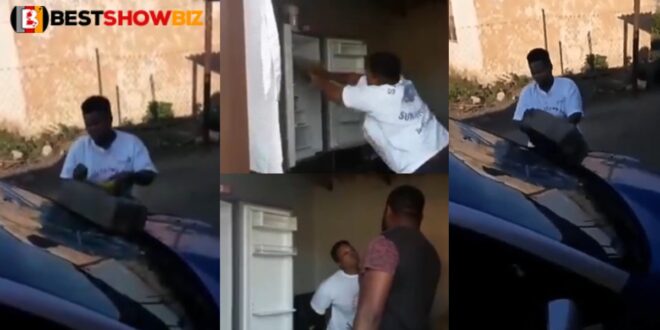 Video: Angry Lady destroys boyfriends car and other home appliances after she caught him cheating

After discovering that her boyfriend had been sleeping with other women, an enraged lady was shown in a video by Bestshowbiz.com going on a rampage and damaging his partner’s assets.

Her enraged emotions erupted as she broke the glass and windows of his car before storming inside the home.

She began trashing practically everything she saw as she entered his room, focusing her wrath and rage on his electrical items, beginning with his refrigerator.

Her antics have sparked debate online, with some believing she had every right to be outraged but went too far.

Unfortunately, the guy in issue was absent, and it fell to a neighbor to intervene and persuade her to halt the devastation.