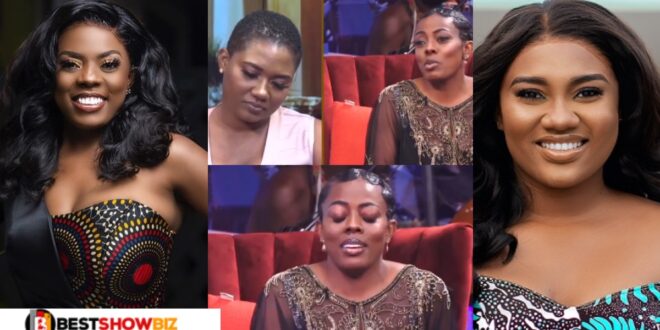 Video: All the lies you said about Me Hurts My Son so well – Nana Aba Tells Abena Korkor

Nana Aba Amoah, a multiple award-winning broadcast journalist, has stated that she is unmoved by harsh comments made about her on social media, particularly those made by Abena Korkor.

She stated that she is unconcerned because most of the bad comments posted about her are fake.

The radio and television host revealed that one of her concerns is her son, who witnesses most of the negative reports about her, which affects him.

She went on to claim that whenever her son sees terrible things about her on social media, he forwards them to her, which makes her concerned about him.

She made this remark when Abena Korkor stormed the United Showbiz show to apologize to her for spreading false information about her.

In response to Abena’s apology, she stated, “she is such a talented kid and I wanted her to do something on mental health not only on TV but to go to schools and communities and call on the UN because we don’t take mental health concerns properly in Ghana.

“ So that’s what I intended to do for her. Three days later, Abena was on social media spreading lies about me, all of which were incorrect, and the people of Ghana, as usual, praised her and cited my name everywhere.

I don’t talk about these topics because I don’t have the time. “The only person I’m concerned about is my son because he sees them and it upsets him,” she explained.