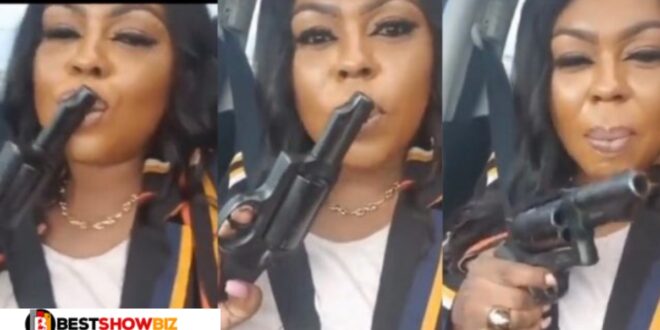 A new social media campaign has been launched calling for the arrest of controversial comedienne Afia Schwarzenegger, who has also been accused of brandishing a gun on social media.

It appears that the rapper took to his social media account at some point to share a video of himself and his new toy with his followers.

As a result of Medikal’s arrest, some internet users have asserted that if he can be arrested for something that occurred some days ago, then Afia Schwarzenegger must also be arrested for the same offense.

It will be recalled that in April of this year, Afia Schwar showed off a gun while cruising in her car, threatening to kill her detractors with it.

Afia is seen introducing her gun, which she has named Barbara, in a video posted to her Instagram page, and threatening to kill anyone who messes with her.

The gun, she claims, was a present from her soon-to-be husband.

“Barbara can take your life, don’t mess with me..I’m legal to kill and I will not spare you”, she said as she waved the gun to and fro,” she said.

In the aftermath of Medikal’s arrest, there have been calls for her to be summoned by the Inspector General of Police to testify in her own defense in the interests of natural justice.

Read Also  "My love for big Buttocks has caused my downfall"- Funny face.