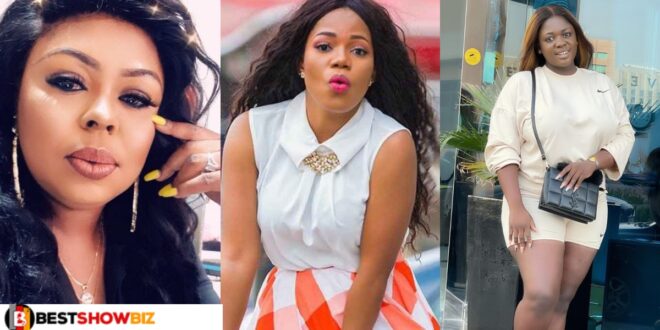 If you have to be controversial in order to stay relevant, it must be exhausting when no one pays attention to you.

Keeping her followers entertained is essential for Afia Schwarzenneger to earn enough money from advertising to support her high and low points.

She is throwing more shots now that no one thinks she is worth two words.

Tracey Boakye and Diamond, her “follow-backs,” were summoned in a video to fire shots at her friends who had turned enemies.

In their refusal to mature, the disgraceful trio, who refer to themselves as the Mafia gang, are still fighting in cliques as if they were still in high school.

She tagged Tracey and Diamond in the video while firing shots at her “former friends.”

She stated that she would like to know if anything positive has occurred in their lives since then.

MzBel and Tornado, who became friends but fell out as expected, are two of her friends who have addressed their fallout.

Diamond tried to shade Delay by being bossy and never paying attention to her. Delay took the classy route and bossed her up.

Delay paid no attention to this, because who wants to take time out of their day to squabble with a washed-up Diamond?

After Delay, Diamond continued to slam MzBel after Mzbel posted a picture that had nothing to do with Diamond.

A post shared by QUEEN OF GH 👑 (New Page) (@diamondappiah_bosslady)

Afia Schwarzenneger and Tracey went on the post as usual, laughing and acting immaturely.

She chose to post this video today in order to bring their feud back to life.