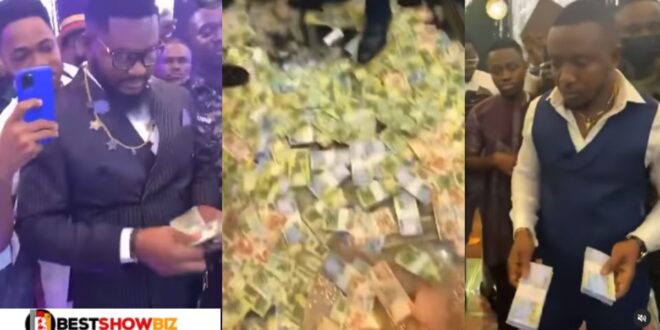 A video of Accra big boys throwing countless thousands of cedi notes at an upscale glitzy wedding at Kempinski has sparked outrage on social media.

The wedding took place at the 5-star luxurious Kempinski Gold Coast Hotel Accra, and the huge guys stole the show.

According to the source, a groom is a man named Alien who opted to tie the knot with his girlfriend in a spectacular manner, with all the big boys in attendance. The videos have been circulating on Snapchat, Instagram, and Twitter, with the wedding’s tagline being “pomp and pageantry.”

The main draw, though, was when these enormous dudes came in with filled bags of cash and began showering it on the dancing couple and the floor. They continued to spray the cash while military and police stood guard.

Social media users have reacted with skepticism. Many people assume they would not be wasting so much money if they worked hard for it. Others who know these individuals personally rebutted the idea by claiming that they are “loaded” and have plenty of money to spare without feeling it.

Kwaw Kese was one of the artists who were invited to perform at the wedding.