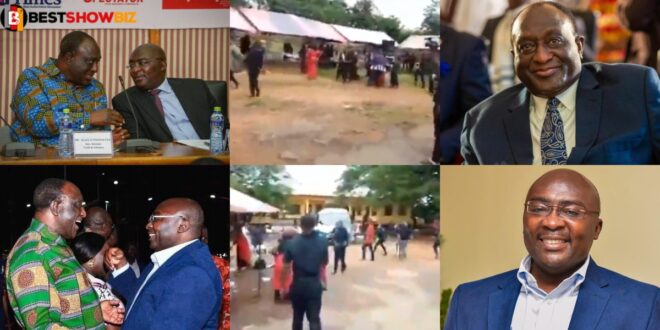 Video: 2 seriously injured as Supporters of Bawumia and Alan Kyeremanteng fights at a funeral

In a video that has gone viral, two people were injured in a serious fight in Suhum, in the Eastern Region, between rival sides of the NPP, allegedly between Vice-president Bawumia and Alan Kyeremanteng.

The reported fight occurred at the burial of Opare’s late father, an NPP member from the Suhum Constituency.

NDC activist Lawyer Edudzi Tamakloe posted a video of the brawl on Facebook, with a comment implying that the brawl was between supporters of Vice President Bawumia and Allan Kyeremanteng.

Read Also  Adjetey and his wife stun in new adorable photos to commemorate 14 years of marriage.

Mr. Osei, a member of Frank Asiedu Bekoe’s team, took the microphone at the burial to declare that they were going but that they were not allowed to greet the MP, which enraged the MP’s followers, resulting in a serious fight at the funeral grounds.

below is the said video;