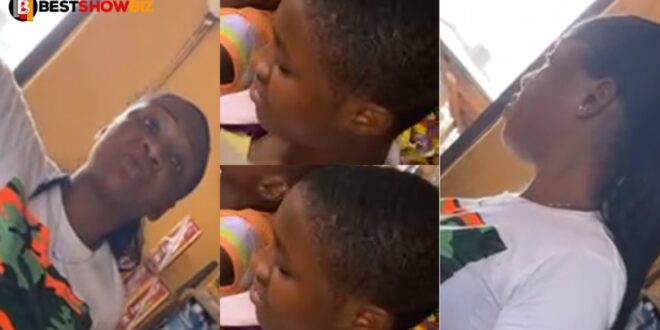 Video: 14-year-old girl marries 48-year-old man after he impregnating her

A 14-year-old girl called Kosi was allegedly married to a 48-year-old man who impregnated her in Asaba, Delta state.

According to activist Harrison Gwamnishu, who published the tale online, Nonye, the victim’s guardian, has been arrested.

The victim, according to Harrison, was impregnated by the man and was ready to marry the man who got her pregnant.

In a video, the guardian, Nonye, and her mother justify their choice to marry off the victim. According to Nonye, the wedding will take place on Saturday in Anam, Anambra state.

“We know it is wrong, but go tell her that she should close her legs the next time because it is not her fault.” We did not make her marry. “

The Guardian claimed that the victim was not married, but that she freely decided to marry the guy who got her pregnant.

“She eagerly…” No one had ever married her off. According to Nonye

The incident, according to Harrison, has already been reported to the authorities, and the guardian has been arrested.