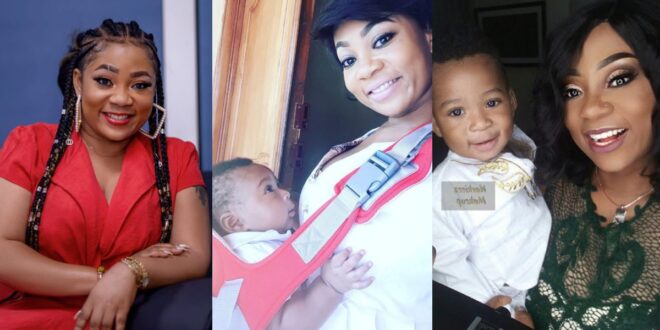 Victoria Zugah, also known as Vicky Zugah, is a well-known and wealthy Ghanaian actress who hails from the Volta Region.

Victoria Zugah is her parents’ third child, and she has gained fame for both positive and negative reasons.

Her first film, “Trokosi,” catapulted her into the spotlight, and that was the start of her acting career.

She enjoys learning from her peers and working with experienced actors in order to develop her ability to perform in successful films.

Trokosi, Total Exchange, Araba Lawson, Cross My Heart, My Lovely Princess, and June 4 Pretty Queen are only a few of the films in which she has appeared.

The actress is also a businesswoman who sells a variety of goods and seems to be successful.

She recently divorced her husband, but she is preparing to move on with her life.

see images of herself and son below.