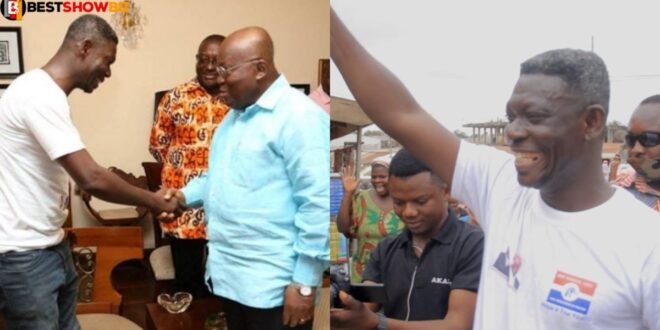 Agya Koo has disputed reports that he advised Ghanaian parents not to send their children abroad because of the country’s current security situation.

The actor argues that the reports are false and that they were staged by people who want to ruin his name. The popular actor, who is a big supporter of the New Patriotic Party (NPP), goes on to say that the reports lack audio or video evidence.

Agya Koo praised Nana Addo and his political party in a video posted on his Facebook page, saying:

The NPP has been blessed by God, everything they are doing has been accepted by Ghanaians and those abroad

People are trying to tarnish my hard-earned reputation for their benefit. I never said that, as we know, they couldn’t even provide a voice or a video of me saying that. Just because I am famous and also close to the NPP, they want to say this to disgrace the party but I want to let them know that this cannot shame the party

I am personally delighted that they disappoint the people. Nana Addo Dankwa Akufo-Addo is doing his best for the country, very soon no Ghanaian will love to travel abroad. A majority of Ghanaians living abroad are looking forward to returning to the country.