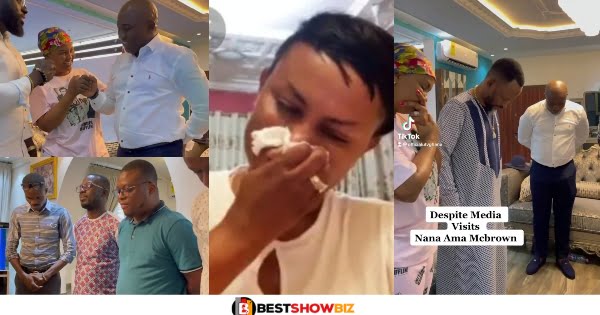 According to reports, actress Nana Ama McBrown is ill. Fadda Dickson, Mr. Roger Quartey, and representatives from the media firm were among the UTV executives that paid a visit to Nana Ama.

The crew prayed for McBrown in a video seen by GhanaCelebrities.Com, pleading with God to grant her recovery so she may resume hosting her program.

The scene reveals that McBrown’s absence from the United Showbiz Show was brought on by sickness rather than, as has been reported, delivery or termination.

Nana Ama McBrown, a renowned Ghanaian actress and public figure, has been gone from her UTV program for months.

Additionally, there were allegations that McBrown lost her employment. Moreover, there were rumors that she had birthed twins.

Asserting that “she can not be fired from UTV because they are her family,” Nana Ama McBrown refuted all of the allegations.

Since she is not as healthy as she appeared to be in the video, Nana Ama is apparently absent from the show.

She appeared quite healthy and fit as they visited her in the video.