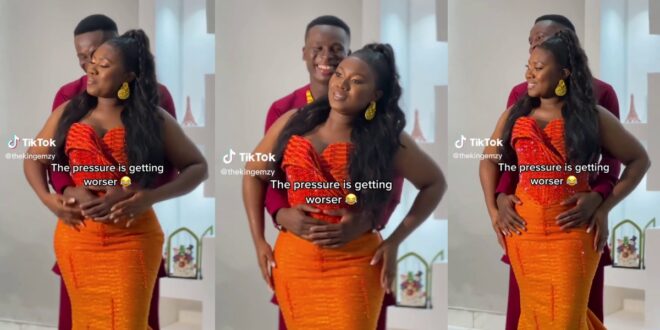 “Use Me Any How You Want”: Bride Tells Husband In Wedding Photoshoot – Video

A voluptuous bride who is not afraid to speak her mind has instructed her spouse on how to properly hold her waist in public.

The King Emzy revealed all of this information in a love video that he uploaded to TikTok. It would appear that the footage was taken at a wedding.

In the seven-second video that was uploaded on the 10th of December, the lady and her guy were posing for photos, but it appears that the lady did not like how the man held her since he held her too loosely.

She thus repositioned her waist and requested that the man hold her correctly while also giving her a firm grip, which caused the crowd to burst out laughing.

Read Also  Husband k!lls his wife because she told people he abuses her at home.

Even the young man could not help but let out a hearty chuckle, but not until after he had complied with his lady and drawn her closer to him.

“You are saying ei.”

“The pressure is getting worser.”

“Heaven is the goal for some of us wai.”

“My future wife hope you are seeing what your fellow woman dey say.”