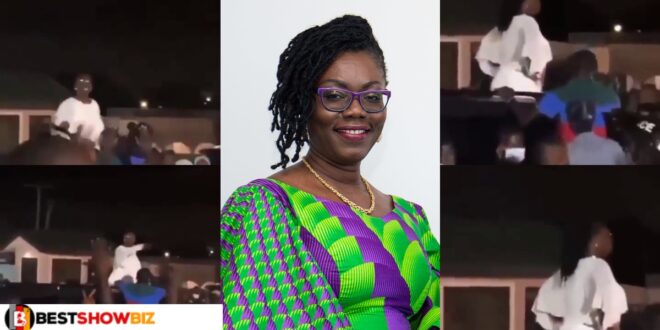 A video of Ghana’s Communications and Digitalisation Minister, Ursula Owusu-Ekuful, trading words with her constituents during the 2020 elections has resurfaced.

This comes after her comments on the proposed 1.7 percent E-Levy on all electronic financial transactions beginning in January 2022, which was included in the 2022 Budget Statement presented to Parliament by Finance Minister Ken Ofori-Atta on Wednesday, November 17, 2021.

Ursula Owusu, the Member of Parliament for Ablekuma West Constituency, said any Ghanaian who can transfer 100 cedis or more is not poor and should not complain if the government wants to tax them in an interview on GH One TV.

Many Ghanaians, particularly her constituents, were outraged by the Minister’s remark, which they blamed on her for ignoring the plight of those who elected her to power in order to support the new tax rate.

The humiliating video of angry youth expressing their resentment of the minister during the 2020 elections has been re-shared, ostensibly to warn her that she will be met with clamor at the next elections.

A group of enraged youth hooted and hurled insults at the loud-mouthed lawmaker in the video, leaving her speechless for reasons that have yet to be revealed.

They clapped and chased her away with songs, while she stood and watched the freakshow happen in real-time right in front of her eyes from the open roof of her 4×4 car, which she had driven to the location.