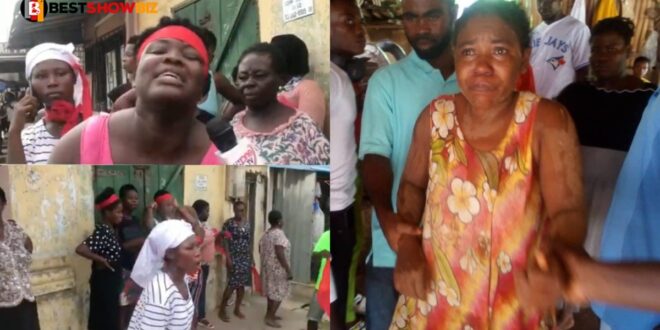 The purported confession of the lady at the center of the alleged false pregnancy and kidnapping tale has taken several Takoradi residents by surprise, especially for those living next door to her.

In their opinion, she must confess in public before they will trust what she has to say.

A number of Takoradi locals who gathered at the Takoradi Central Police Station on Friday, where Josephine was being kept in custody, think that the way the narrative has thus far developed throws into doubt the reality of the fabricated pregnancy claims made by Josephine.

Consequently, they desire to hear it straight from the source in order to think that everything is fake.

Some have called for a DNA test on the woman’s first child, while others are interested in the reason behind the purported faked kidnapping and pregnancy.

“This is a mind-boggling issue; we are all trying to understand and find out what exactly is the case. What we all knew was that she was pregnant, and then it turns out that it is fake. There was considerable evidence pointing to the fact that she was pregnant, so there is a bit of difficulty. So I will be happy to hear from the woman’s own mouth that she actually faked her pregnancy; from the horse’s own mouth, then I can believe.”

Following the release of her mother, Agnes Essel, from police custody, Josephine Panyin Mensah was transported back to the detention center.

Some people, on the other hand, think that there is more to the tale that should be revealed.

“The issue is horrifying and difficult to comprehend. So we want to see with our own eyes because a lot of people claim they saw her pregnant. Unless I get to see her, or she comes out publicly to confess that she was not pregnant, there is no way I will believe what the police have said.”

“I live in the same house with the woman, so I am really shocked. I see her almost every day with her protruding stomach with her other child. I will not believe claims that she is not pregnant.”