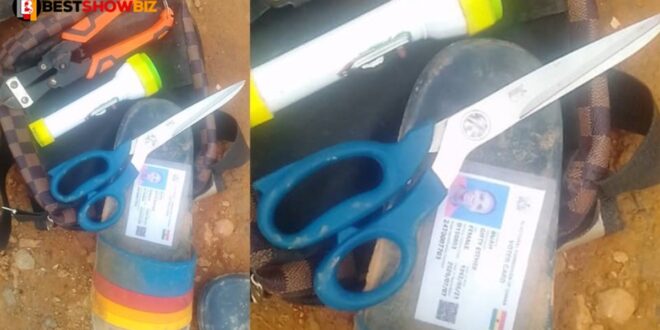 Nothing can stop it once the timer is up. Also, every day is for the thief, but one day is for the master. Police in Takoradi is on the lookout for an armed robber. The armed robbers headed to the hostels near the Ahantaman Girls Senior High School in Ketan, Sekondi Takoradi.

Pupils from the University of Mines and Technology (UMAT) Takoradi campus share the same hostels as Ahantaman Girls Senior High School students. The armed robber arrived in a cab late at night. He had scissors, a flame, a cutter, and other tools.

One student awoke suddenly and observed the armed thief plundering the students’ handbags, phones, and other personal items. She yelled for help and others came, but the armed robber fled, and the students searched for him all night.

Read Also  New photos of 23-year-old Ghanaian footballer, Afoakwa possing with a fan he is younger than pops up

But he jumped out of the taxi, WR 1220-19, and ran for his life. I forgot some vital paperwork that could lead to my detention. A temporary driver’s license with the name Rhule Franklin was seen at the scene. In addition to the torches and other weapons found on the scene,

The Sekondi District Police Command is investigating the crime. The license helped the cops find him. But it’s possible he picked up the license in one of his activities. But if it is his, he is doomed. Mr. Kalsum Mingle, an assembly member for the region, corroborated the report and said locals, including schoolchildren, had long complained about armed robbers.

Read Also  "I have cheated on my wife so many times, now she is fed up"- Bulldog (video)

To deter armed thieves, the hostels will need a significant security presence. It must be done immediately to avoid bad news in school.