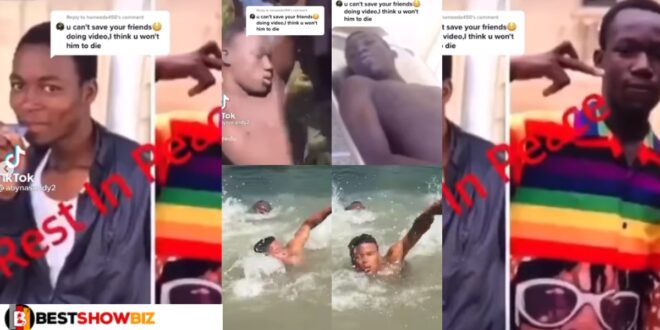 A viral video that tells the heartbreaking story of two boys who died while swimming in a river has sparked outrage after it surfaced on the internet.

The 17-second video, which has been circulating on various social media platforms, shows at least five young men, believed to be close friends, having fun in a river on a sunny afternoon.

While two of the young men were seen swimming cautiously along the river’s shallow bank, the three others decided to venture further into the steep section of water, perhaps to demonstrate their swimming skills.

A sixth person, who was busy filming the fun moment, could be heard cheering on his friends, unaware that tragedy was about to strike.

The three young men who went far away could be seen struggling to stay afloat on the surface of the river as they began to drown on the spur of the moment.

Fortunately, one of them, only identified as Ben, was able to swim ashore and join the two who were playing it safe in the shallow section. The two others, on the other hand, died as they sank helplessly, gasping for air and pleading for help.

The bystander filming them was heard pleading with Ben to reach out to the two other friends who were drowning, but he couldn’t because he was also fighting for his life.

Watch the horrifying video below.