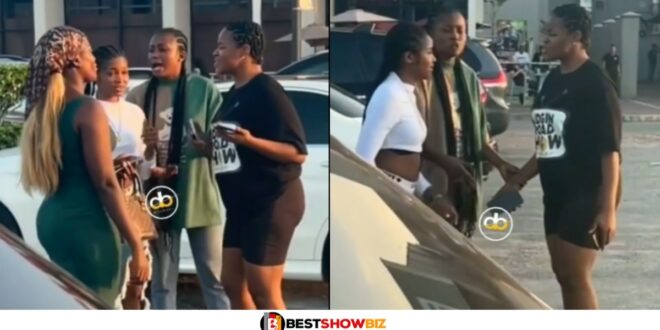 Two women have gone viral on social media after a heated argument at the mall over a guy. The two slay queens are reportedly dating the same guy and have been preying on each other for quite some time.

The main chick of the unidentified guy has been tracking her boyfriend’s side chick for some time now and finally caught up with her yesterday when they unexpectedly met at a Shoprite shopping mall in one of Nigeria’s states.

The two ladies created a commotion in the parking lot by angrily exchanging loud insults.

The lady who claims to be the main chick aggressively seized the other lady’s phone, claiming that it was purchased for her by her boyfriend (David).

On the other hand, the accused lady denied ever knowing or dating David.

Throughout the drama, two ladies tried to settle the dispute, but tempers were so high that neither party would listen to the other.