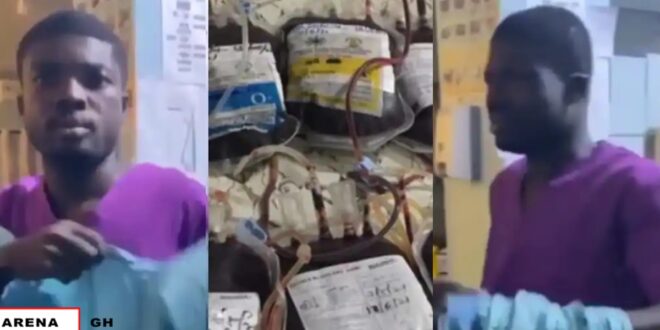 Two robbers were apprehended at the Korle-Bu Surgical Department early this morning attempting to flee with 14 units of blood (10 from the 3rd-floor surgical ward, 3 from the surgical theater, and one unidentified).

These blood samples were collected in preparation for surgeries later that day.

The robber was dressed as a doctor in a lab coat, and the other accomplice was driving a 2018 matiz parked near the main Korlebu administration car park.

He was apprehended while attempting to flee the surgical theatre with an additional three units of blood after dumping the 11 units of blood in the waiting car packed in the car park between the hours of 2 and 3 a.m. on May 22, 2021.

Read Also  You talk too much – Archipalago to Kennedy Agyapong

The theives were apprehended with the aid of two male night nurses from the 3rd floor, Nephi and Hakeem, who alerted security officers about the incident early.