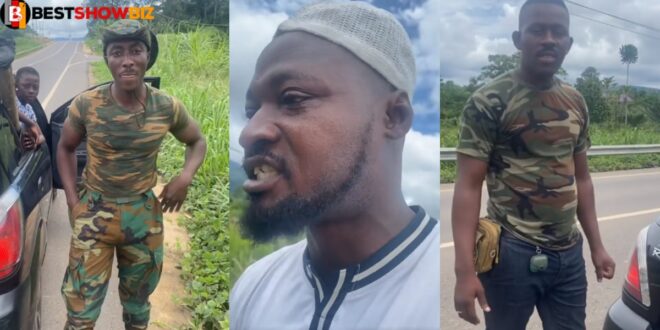 Funny Face, a Ghanaian comedian, went on another rampage after being prevented from suicide by two Ghanaian army men.

Funny Face, who appears to have recorded the video himself, is accompanied by two army officials who appear to be accompanying him to ensure his safety.

They tried to stop him the day before, but he passed by, and they’ve finally caught up to him, according to Funny Face.

He’d left his automobile somewhere else and was wandering aimlessly.

The officers appear to be sympathetic to the comic actor, who appears to be experiencing another mental collapse.

The soldiers escorted him in their automobile to the location where he had left his vehicle.

Funny Face is completely out of control, and he has to be institutionalized for his own safety!

Check out his video below…