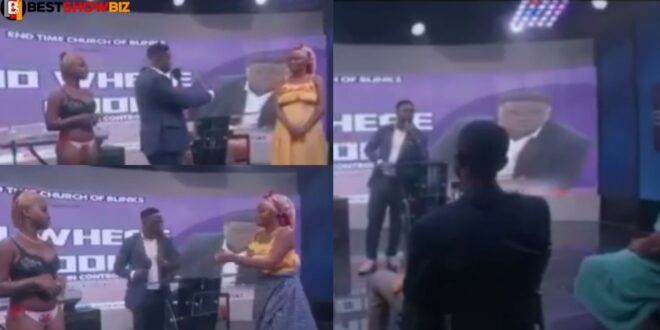 Two beautiful and endowed slay queens give testimony in church while clad half-naked in front of their pastor, according to shocking footage circulating on social media.

You may be asking how this is possible, but don’t be astonished because this video is one of Pastor Blinks’ works, a movie director who played a pastor and was caught on camera shaving the public hair of her female worshippers.

Pastor Blinks is seen speaking to the congregation while one of the Slay Queens stands in front of him wearing only a bra and a pair of pants.

As if that wasn’t enough, another lady appeared out of nowhere and removed her panty from the pulpit.

Meanwhile, the other joyful worshippers couldn’t sit still without cheering on the two shameless Slay Queens.