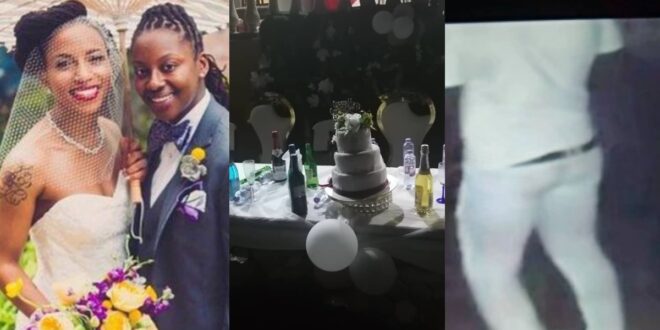 Two journalists, including an Adom FM editor, were kidnapped in Kwahu-Obomeng by a ‘Irate’ LGTQI party after two members of the same sex were revealed for having a secret wedding.

Many countries around the world encourage LGBT people to live together, but it is commonly frowned upon in Ghana. When the first gentlemen of the country lambasted it, the battle for this right came to an end.

When reporters from the media outlet Angel FM were attacked by some anonymous members of the LGBT community after the reporters exposed their wedding, the subject of LGBT issues resurfaced in the press.

At a lesbian wedding ceremony in Kwahu in the Eastern district, the Obomeng Police detained 22 people.

22 people, including six men, were arrested in Kwahu-Obomeng, Eastern Region, for allegedly conducting a wedding ceremony between two females at a common LGBTQI+ hangout.

Around 10 p.m. Saturday night, a local journalist in the region, Okwahuhemaa Piesie Afia Pokua, received information from a source inside the Kwahu-Obomeng palace that certain people claiming to be members of the LGBTQI+ community were having a ‘marriage ceremony for two ladies at a common place in the community, and they stormed to report it and get the police involved. (Continue reading)

When female reporter Okwahuhemaa Piesie Afia Pokua returned to gather information from the famous lesbian wedding on Kwahu Obomeng in Ghana’s Eastern Region, she and her two male colleagues were locked in a room, according to her.

She said that when they arrived at the location of the hidden wedding, several members of the party approached them and kidnapped the them.

She also stated that the expose was undertaken by three of them in order for the wedding to be interrupted by the police, but they returned because they needed to learn more about the wedding event.

Afia Pokua revealed that she was grateful to have survived.

According to her account, some of the party members who were arrested on Saturday night were given bail and are very violent against the media and others beyond their community.

“Teacher Anointing and Dwanena have been incarcerated. I was able to avoid their assault. We were immediately picked up by a driver who saw me and the incident was reported to the police. I’m not sure what happened to them right now.

“As soon as they saw us coming, they charged at us, screaming that we were the ones who had arrested them. They even took the reporters’ phones and crushed them with a stone,” she recounted.

Piesie Afia Pokua revealed that the taxi driver drove her to the police station to make a formal report and get her coworkers saved. She was worried that the group had attacked her coworkers, and that any more delays could jeopardize their protection.

“An office has been appointed to transport me there for their rescue.”

Kofi Adoma Nwanwani, on the other hand, indicated that the police send in reinforcements to deal with the crisis. He advised the reporter to remain secure while the police dealt with the situation.