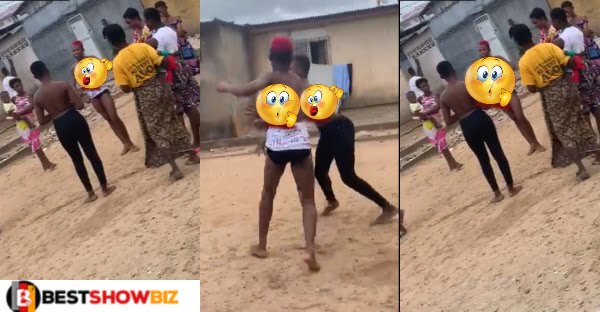 Two Girls Remove Their Tops As They Fight Like Men (video)

A viral video depicted a scene in which two women were seen fighting on the street without wearing a top.

In the video, the two exchange insults while other ladies stand by and watch before they engage in a fistfight with their breasts dangling on their chests.

According to accounts, the two females were arguing over one man and decided to participate in a fistfight to determine who would be the official boyfriend of the lady.

Many netizens have voiced concern after seeing the footage, believing that the fight may have resulted in a very serious problem if one of the girls had accidentally struck the other’s breast during the battle.

Read Also  Meet the Nollywood actors who are Ghanaians but are making it big in Nigeria.