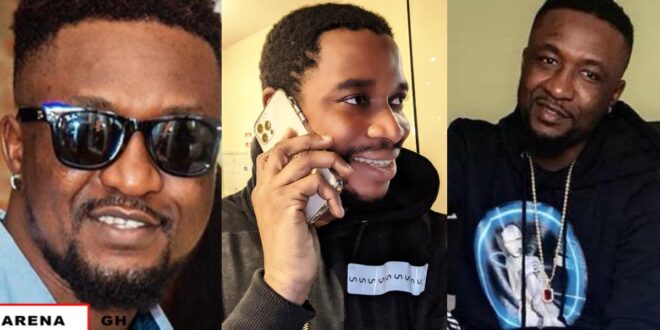 “Twene Jonas has nothing that will make me jealous, I am only advising him to stop insulting”- Archipalago

Twene Jonas has received advice from Palago Mufasa, also known as Archipalago, a Ghanaian young man who is known for his study and criticism of policies and other high-profiled figures in the country.

You can remember that Twene Jonas went viral on social media after making comments that appeared to offend the Ashanti Empire’s King, Otumfuo Osei Tutu II, for allowing illegal mining to take place in the area. According to him, Otumfuo and other chiefs have sold their land to illegal miners, whose operations have destroyed the majority of our water bodies.

Twene Jonas was asked by Otumfour’s Nkwantasehene, Nana Boakye Yaw Ababio, to travel from the United States to Ghana and apologise to the Asantehene for his remarks after the video went viral on social media.

Whatever the case may be, Twene Jonas has confirmed that he would not apologize to any chief for his remark. In his rationale for not wanting to apologize, Twene Jonas claims that no amount of lies can conquer truth, and because he chose to be a proponent of reality, he sees no valid reason to apologize to either of them for anything.

In the end, Archipalago replied by saying that no amount of abuse rained on Ghana’s heads would change their perspectives to improve the country’s situation. He also said that some of Twene Jonas’ claims are nothing more than lies, and that he should be careful.

As far as he is concerned, he believes Twene Jonas is only doing this because of the views and likes he receives from online media, which he considers unimportant because his words are often inappropriate.