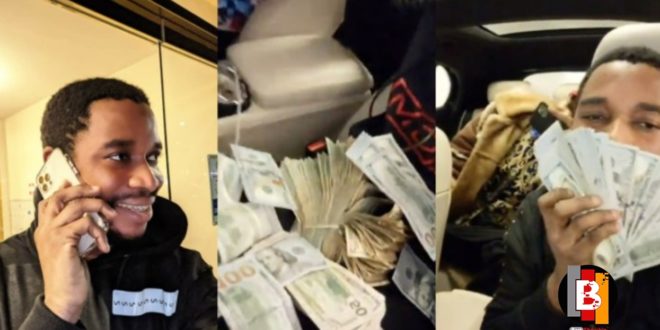 US based Ghanaian internet sensation Twene Jonas, who is noted for slamming home mother land, has taken to social media to flaunt some wealth.

In a video that has gone viral on social media, Jonas was seen with two of his Black American friends as he showed off 1 million dollars & iPhone 12 pro to prove that his usual saying; “system is working 24/7”.

This is coming after some of his critics blurted out that he might be even homeless in the United States; doing some menial jobs to survive, yet comes out on social media to call out Ghanaian leaders.

Twene Jonas additionally said $100,000 can buy a house in Ghana so people who have been dissing him for being homeless should cease.

In another post, Twene Jonas shared a photo of himself flaunting his newly acquired iPhone 12 pro max worth $999 and captioned;

“If your actions inspire others to dream more, learn more, do more and become more, you are a leader. Glass nkooaaaa lol The system is working 24/7 iPhone 12 pro max.”