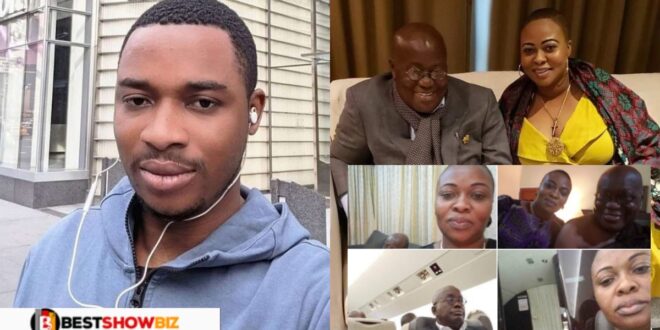 As is customary for Jonas, he launched a flurry of scorching blows at the President of the Land.

Twene Jonas was responding to a video uploaded on social media by a woman claiming to be the President’s sidechick.

The woman went on a brilliant rant, which has gone viral, in which she made numerous charges about the President.

She explicitly stated that they were in a romantic relationship!

In response to the lady’s claim, Jonas slammed President Nana Akufo-Addo and Ghanaians who protect him when he is chastised.

When the John Mahama ‘Papa No’ issue was in the news, Jonas claimed that people should not pretend that Akufo-Addo is not the same as Mahama.

Ghanaians, on the other hand, lambasted him and claimed that the ‘old man’ was not the same.

The trending news, according to Jonas, has justified his position, and people defending Nana Addo are being silly.

He also went after Nana personally, accusing him of sleeping with a ‘prostitute.’