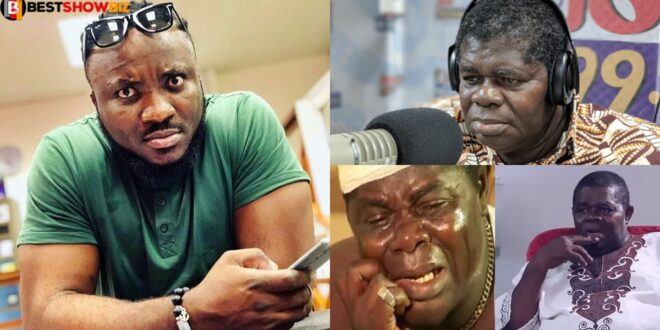 DKB, a Ghanaian comedian, has taken a harsh stance against veteran Ghanaian actor Psalm Adjeteyfio, also known as TT, by offering him advice.

The fact that TT is constantly begging for money, according to DKB, is an embarrassment for him.

According to him, it reflects poorly on him and is an enormous humiliation for the creative arts profession, given that he has worked as an actor for more than three decades and has yet ended up as a beggar.

After that, DKB advised TT to put the money he had been offered after coming out to plead for aid into something productive.

According to DKB, TT must use the GHC 20 in upkeep money to purchase daily basics in order to be able to care for himself and his family.

During a recent interview, Psalm Adjeteyfio, nicknamed “TT,” pleaded with the audience for assistance. According to TT, he has turned into a charity case after requesting that people assist him with GHC 3000 in order to pay his rent. He also mentioned that he was out of work.

The Greater Accra Minister, Hon Eric Quartey, has also been said to have committed to giving TT GHC 1500 every month until the end of his term in office.

Read Also  If my son decides to be gay, he has all of my blessings – Princess Shyngle

DKB has consequently urged that TT make use of all of the assistance available to him and refrain from begging for assistance on a regular basis.