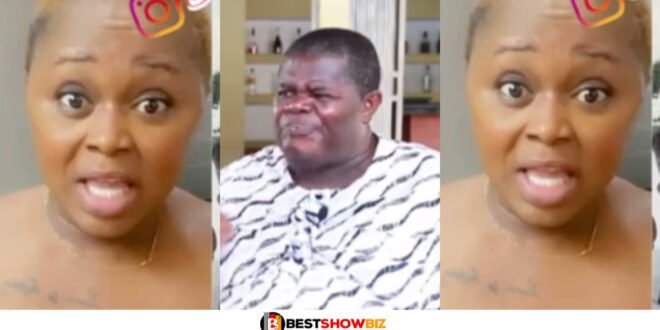 For reportedly lying about the large sum of money given to him by Ayisha Modi when he stormed the internet to complain about his rent a few months back.

Gh Mouth Piece can be plainly heard insulting TT in an explosive recording that is presently making ripples on the local digital space for informing the entire world that he was only handed 500 cedis instead of the 5,000 cedis he received from Ayisha Modi.

Gh Mouth Piece, who sounded both upset and enraged on the clip, stated that she handed TT 5,000 cedis plus beverages and other items sent to her by Ayisha Modi to be given to the renowned actor on her behalf.

The IG blogger whose reputation is presently in jeopardy also stated that the money was provided to TT in cash in the presence of several witnesses.

She frantically inflicted deadly curses on TT, claiming that he would perish and not make it to Heaven.

Listen to the latest audio clip below…