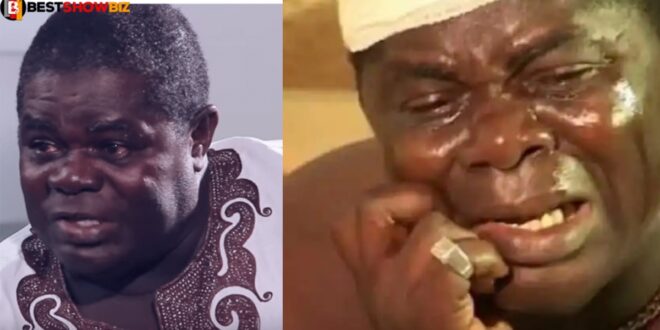 Many people in Ghana are concerned about the future of new creatives in the Creative Arts business as a result of the dreadful state of veteran actor Psalm Adjeteyfio, often known as T.T., and his family.

In an interview that has garnered the attention of well-meaning Ghanaians, including Vice President Dr Mahamudu Bawumia, the 73-year-old actor appealed to the public for financial assistance in order to pay his rent of approximately GH3,000, which is due soon.

T.T. expressed his dissatisfaction with his current situation in the interview while portraying himself as a charity case. According to the iconic actor, he now has nothing to his name after many years of bringing joy into many households during his heydays, and has been reduced to the status of a pauper as a result of his downfall.

Read Also  "I agree with anyone who calls Osebo [email protected] because of how he dresses"- Ex wife of Osebo reveals.

Apparently, there is some rationale for the fact that T.T. cannot brag about any accomplishments despite having worked as an actor his entire life.

bestshowbiz.com has gone into the archives to unearth a video of T.T. apologizing to his wife and children for abandoning them to chase another woman, whom he described as the “demon” responsible for his troubles.

During an interview with Delay in 2018, the actor fell down in tears as he recounted all of the difficulties he had put his own children through as a result of some irrational decisions he had taken several years before the interview.

T.T. became visibly distressed as he described all of the horrible distresses his children went through under the care of his former lover, and he was unable to keep his tears from falling as he recalled the entire scenario.