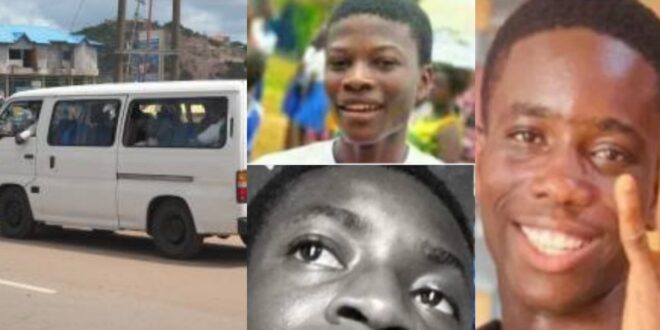 After a Trotro driver ran over three students from the Presbyterian senior high school (Presec) ADEISO in the eastern area, they died on the spot.

Three students were riding a motorcycle with the registration number M-20-GR-6731 when the accident occurred, according to reports.

According to eyewitnesses, the car, which was headed to Accra from Asamankesse, attempted to overtake a tipper truck but ended up in the lane of the students on the motorcycle.

Two of the students were in their final year, and one was in their first year, according to a post by MynewsGh. They were all from PRESEC Adeiso.

As they were all rushed to the ambulance, the Trotro driver and several passengers in the urvan were injured.

According to the details collected, a related crash happened at the same site not long ago, leaving passensgers with different degrees of injury.