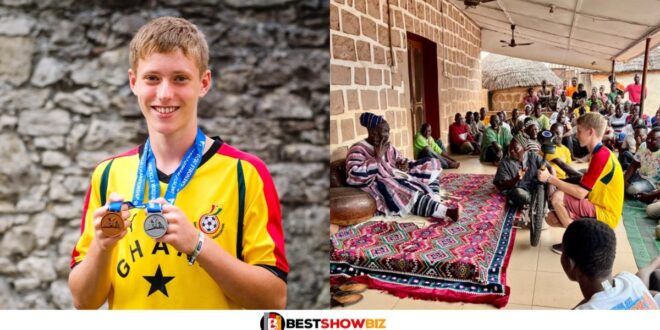 Following his valiant performance at the Unicycling World Championship, Trey Haun has now made his way back to Nalerigu.

Trey Haun, age 15, has returned to Nalerigu, which is located in the North East Region of Ghana, in the wake of his outstanding performance at the Unicycling World Championship.

The young man made Ghanaian history when he won two medals at the Unicycling World Championship, one silver and one bronze. He was the first person from Ghana to ever win a medal at the competition.

When his father posted about his son’s achievements on social media, it quickly gained widespread attention.

Because Trey Haun is a white boy who is representing Ghana, many people have asked his father how the kid became a Ghanaian.

His father responded by saying that he and his wife brought Trey to Ghana when he was just one year old, and they have been living in Nalerigu for approximately half of Trey’s life.

On Tuesday, August 9, 2022, he arrived back in his hometown with the two medals he had earned, and he was greeted with a warm welcome.

During the celebration, Trey Haun gave his medals to Naa Bhagu, who is the paramount chief of Mamprugu.