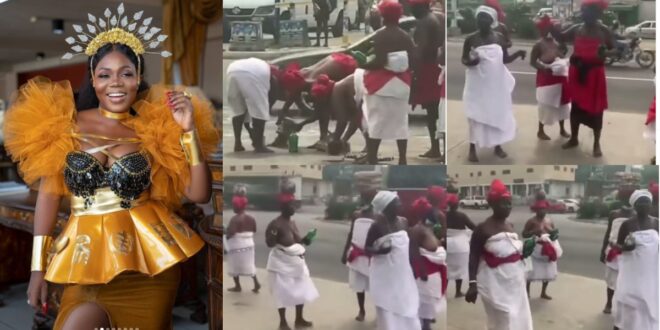 Video and reports circulating are that traditional women have stormed Despite Media over Mzbel’s fraud allegation.

it could be recalled that renowned singer Mzbel on Mcbrown’s show claimed the Ga Traditional council, Naaee Wulomei has frauded her with an amount of GHC 20,000 when she brought her case to them.

just after that interview, the Ga Traditional council reacted to Mzbel’s claims revealing that she brought her former friend, Afia Schwarzenegger there for them to curse and kill her.

Naaee Wulomei in an interview claimed Mzbel should come for her money where she claimed she does not like the money anymore.

the women were seen wrapped with a white and red cloth while the holds schnapps and carries a pot.

at a point, they were seen chanting and pouring the schnapps on the ground while they throw the pot on the ground to break it into pieces.

for reasons why they did that is yet to be known but it appears it’s all about Mzbel’s issue since she sat on Despite’s UTV and made such allegations.