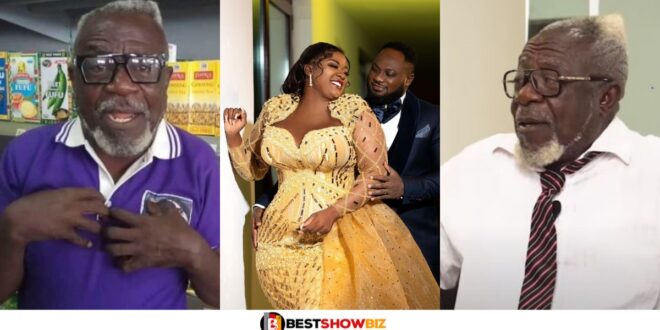 Tracey Boakye and her husband Frank’s wedding was criticized by Oboy Siki, who referred to it as an arranged marriage that will fail within the next six months.

“I don’t see it as marriage, I see it as a trick, I feel they sat and plotted something,” he said.

“It’s not the type of marriage that God said the two shall become one. It’s not God’s plan … what they have done is like cover-up,” he continued.

“Their marriage will not go far. If it reaches six months it means their marriage contract is six months. This is because my daughter can go six months without social media, that’s where she does everything but with a good marriage, you can’t do that” Oboy Siki said.

Read Also  "I had a child with sister Derby's boyfriend, I use the child for ritual"- Hookup girl reveals (video)

He added: “No responsible man will allow his wife to go on social media to talk unless he is not responsible unless the man is also like that. Then it means they all sat on social media and agreed to marry, if that’s the case then it can end in 30 minutes”

“So what they have done is below the belt … it’s a planned thing. Ghanaians shouldn’t take it as marriage. I know how marriages are organized … this is not proper marriage”.  he added