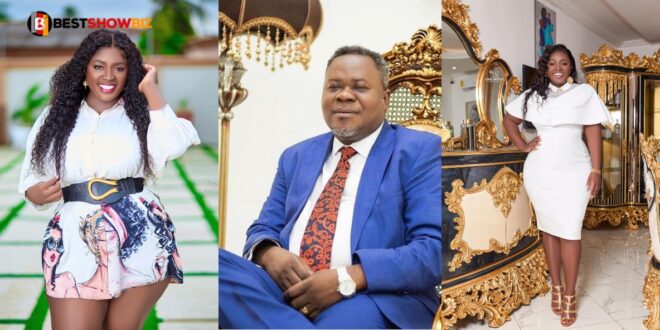 Tracey Boakye Was Allegedly Spotted At German Embassy Today with Dr. Kwaku Oteng (her papa no)

Tracey Boakye is said to have been spotted with her purported ‘Papa No’ at the German embassy in Accra today.

Dr. Kwaku Oteng is said to have dated Tracey as a sidekick, and a sizable portion of the public believes he is the father of her child.

This is owing to rumors that Tracey Boakye snatched the spouse of her friend, Akua GMB.

Dr. Oteng allegedly dumped Tracey because she failed to prove she was “wife material,” according to Gh Mouthpiece.

“This man, Dr. Kwaku Oteng, marries any young and ambitious woman he comes across. Borla Bird di3 He placed her exactly where she belonged.

Kwaku Oteng also left ‘Borla Bird’ because her body stinks, she stated in a later video.

A social media in-law, on the other hand, has come out with a different gist, providing a different side of the story.

Tracey was spotted with Dr. Oteng in the German consulate today, according to a source who wrote anonymously to various Instablogs.

The individual did not specify what they were there for, but it appeared to be self-explanatory.

Other social media users, on the other hand, believe this is a staged release from Tracey’s team to dispel rumors that Oteng has dumped her.

Take a look at the allegations below…