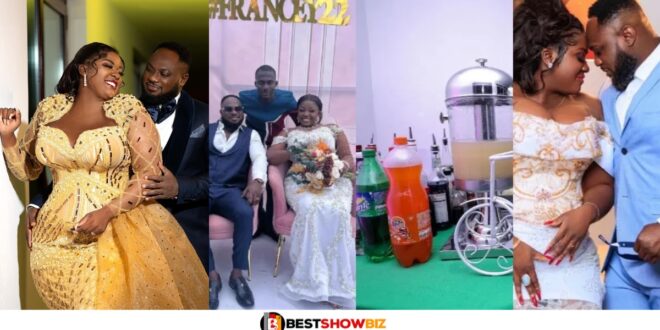 The stunning nuptials that Tracey Boakye and her fiancé Frank Badu Ntiamoah shared in Kumasi on the 28th of July are continuing to make headlines in the wake of their recent marriage.

The most recent rumor doing the rounds indicates that a woman in her thirties who calls herself an East Legon landlord and a self-proclaimed boss lady provided guests at her wedding with low-cost alcoholic beverages.

This startling assertion was made by Naana Brown in a viral video that was discovered by our team. In the video, the estranged friend of Tracey said that the latter could not afford to buy pricey beverages for her visitors.

In order to accommodate the large number of guests who had gathered at the venue for the wedding that was being dubbed #Francey22, the various alcoholic beverages that were being given were reportedly combined with Fanta and Coke.

She went on to say that the catering services at the wedding did not live up to expectations, and because of this, Tracey strongly advised bloggers not to take photographs of the drinks and food that were served during the ceremony.

In the video that may be found below, Naana Brown makes the outlandish charges.

Tracey’s pre-wedding images on Instagram, in which she reveals her soon-to-be spouse, caused the three-day wedding ceremony to begin trending even before the first day of the event.

The photographs elicited a range of responses, with some credible insiders claiming that Tracey had poached her fiancé, Frank Badu Ntiamoah, from another Kumawood actress, Vivian Jill Lawrence.

After the wedding, just when we thought the naysayers would leave sleeping dogs lie, more cans of worms have been opened in an attempt to discredit the beautiful nuptials between the newlyweds.

In the meantime, a seasoned actor in the Kumawood industry named Oboy Siki said that Tracey Bokaye’s marriage will not last more than six months due to the fact that she is obsessed with social media and a sensible guy would never put up with such behavior.

In an interview with SMART GHANA TV, Oboy Siki, who is known for his brazenness, termed the most talked about wedding of Tracey Boakye as a cover-up in the larger scheme of things.

He implied that Tracey had lost her gracefulness as well as the respect that the majority of Ghanaians had for her as a result of the fact that she had joined a circle consisting of individuals who were immoral and foolish.