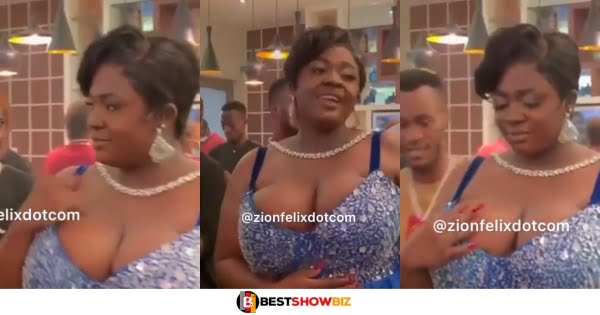 Tracey Boakye made sure to grab attention by putting on a busty show for the Ghana Music Awards UK premiere on Friday in Accra.

The actress, dressed with a blue floor-length gown with crystal accents and a plunging neckline that displayed her enormous assets.

In a video of her that was taken, the self-described East Legon landlady was wearing short black hair and accessorizing with a matching pocketbook.

When Tracey realized the paparazzi were shooting her nonstop, she was spotted altering her dress, as if she were purposefully putting her b()0bs on display.

Tracey’s Instagram friends and followers, where the footage was posted by blogger Zionfelix, have differing opinions about the attire she wore to the opulent event.

Some people praised the mother of two, saying they thought she nailed the look this time around in contrast to her previous one, which had received harsh criticism.

Others mocked her terrible sense of style once again.