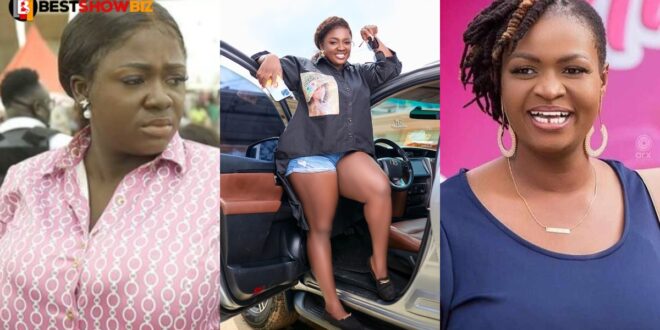 “Tracey Boakye has d!abetes, that is why she cannot do body surgery”- Ayisha Modi

It appears that Tracey Boakye has been drawn into the ongoing spat between Afia Schwar and Ayisha Modi, which became violent earlier in the day when the infamous comedienne uploaded a horrifying picture of the BHIM Nation godmother on her Instagram page in an apparent attempt to humiliate her.

As a result of Tracey Boakye’s scathing comment under Afia Schwar’s ridiculing post of Ayisha Modi, the unforgiving want to be music producer has made an incendiary video targeted at harming Tracey, in which she makes outlandish allegations that the self-proclaimed East Legon landlady suffers from diabetes.

Tracey’s illness, according to Ayisha, prevents her from undergoing cosmetic surgery to achieve the figure she wishes, as other Ghanaian celebrities have done in order to attain their goals.

When it came to Tracey Boakye’s physical appearance, actress Ayisha Modi went into additional detail, describing her as “shapeless” with “disgusting” legs.