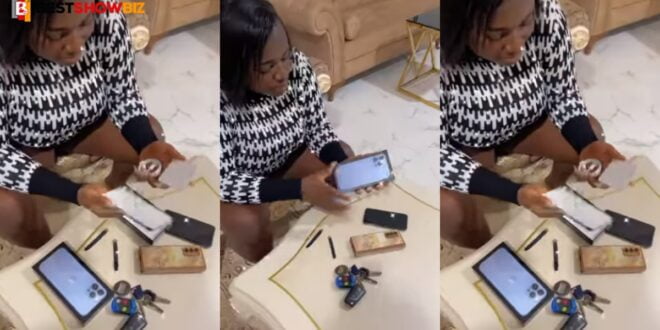 Tracey Boakye, an actress aka East Legon Landlady, has turned to social media to declare that she is now the proud owner of not one, but two iPhone 13 Pro Max smartphones.

A new video posted on Tracey Boakye’s Instagram profile, which was discovered by Bestshowbiz.com, shows the actress reclining in her luxurious living room as she unboxes the phones.

The mother of two, who looked to be overjoyed at the prospect of owning the most recent version of the Apple gadget, was seen grinning with delight as she unboxed one of the devices in question.

She then proceeded to demonstrate that she had really acquired the latest edition of the phone by unpacking it and displaying some of the accessories that were included with it.

Tracey Boakye demonstrated this by displaying the inscriptions on the back of the phone’s box, which displayed the model of the phone for everybody to see.