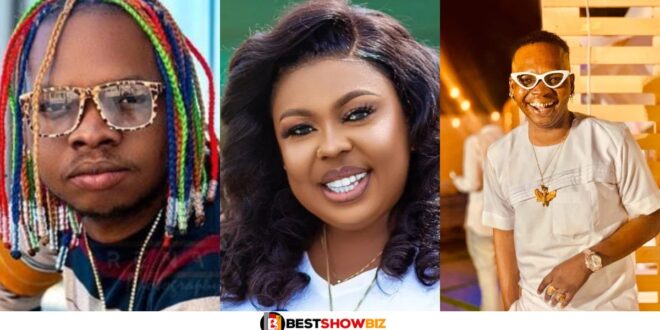 “Tornado is gἆy, he slept with a pastor who bought him a car”- Afia Schwar (video)

The long-running beef between Afia Schwar and Nana Tornado was reignited over the weekend after the latter threatened to release the bedroom videos of the former’s son, who is thought to be gay.

Approximately three months ago, Nana Tornado made baseless accusations on the internet that Afia Schwar’s son, James, is a homosexual who sleeps with other men for the purpose of obtaining money and favors.

If Afia Schwar continues to abuse him (Tornado), he has reportedly threatened to go “nuclear” on social media by publishing some of the atopa films that show James being chopped by another man.

Earlier in the day yesterday, Nana Tornado sent an upsetting birthday message to James, who shared his milestone birthday of 21 years with his twin brother John.

WHEN YOU KEEP STARING @YOUR YOUNG LOVER GROWING ??Happy Birthday JAMES TRUM* DARLING ?? I Still Have Your Akuro Bewu Here???”

Afia Schwar, who has refuted Nana Tornado’s disturbing allegations that her son is gay, has unleashed her wrath on her well-known adversary in a new video.

It is not her son James who is gay, but rather Nana Tornado herself, according to Afia Schwar.

Afia Schwar viciously said in the video that Nana Tornado sleeps with a well-known pastor in order to make ends meet since he is destitute and sells his body for a living.

She went on to say that even the pastor was the one who handed him the Ghc 30,000 that he needed to clear his car from the port.

Angry Afia Schwar issued a challenge to Nana Tornado, demanding that she release the bedroom recordings and photographs if it turns out that his allegations that her son is gay are true.

Since Afia Schwar and Nana Tornado ended their friendship of six years, the two loudmouth celebrities have been at each other’s throats for reasons that are best known to them.