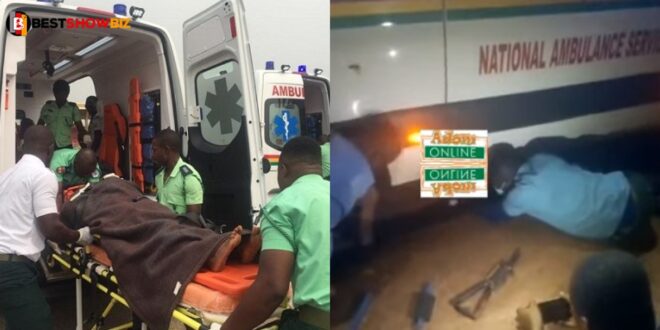 Too Bad(Video): moment ambulance carrying patient gets stuck in the mud on bad road

According to an Adom News report and accompanying video, a patient being transported to the hospital in an ambulance became trapped in the mud owing to the poor condition of the roads from Adabokrom to Nkrankwanta.

According to sources, the patient, a 21-year-old male, was being carried to Sunyani Hospital when the event occurred, putting him in a critical condition.

The unidentified patient was allegedly suffering from pneumonia, hypertension, and TB when, at 5:20 p.m., he was referred for additional medical care from the Essam Government Hospital in the Bia West District of the Western North Region.

He was on oxygen support when he boarded the ambulance about 8:30 p.m., but the ambulance became stopped in the middle of the road at 9:20 p.m.

Read Also  Most of the female celebrities are prostitutes – Afia Schwarzenegger

According to the report, all attempts to push the ambulance out of the muck for almost an hour were fruitless, prompting a distress call to the Bia East team for help.

The patient was finally transferred to the Bia East ambulance, which arrived in Sunyani about 12:30 a.m. and is presently responding to treatment.