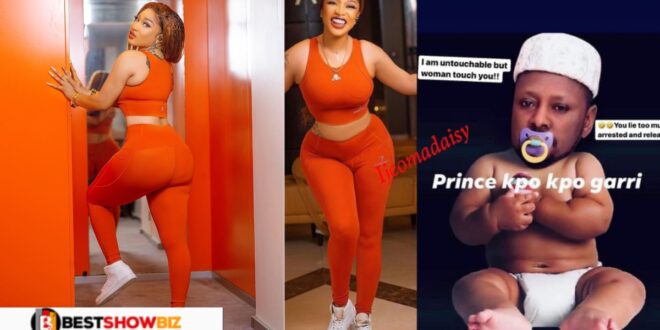 Tonto Dikeh’s feud with her ex-boyfriend Prince Kpokpogri is likely to continue as she seeks to retaliate for the pains he caused her while they were dating.

After an altercation at a hotel in Abuja over an SUV he bought for her when they were dating, news of his arrest made waves on social media on Sunday, October 17th.

According to reliable sources, Prince Kpokpogri tracked Tonto Dikeh to a hotel in Abuja, where his SUV was parked and the actress was allegedly staying.

According to reports, Prince deflated the car’s tyres and used a white car to block the SUV from moving. His police escort also threatened to shoot a female warehouse worker who tried to stop them from causing damage to the SUV.

In a Photoshopped photo of him as a baby in a diaper with a bip in his mouth, Tonto, who shared the photo, claimed she had “touched the untouchable prince” and that he “lies too much.”