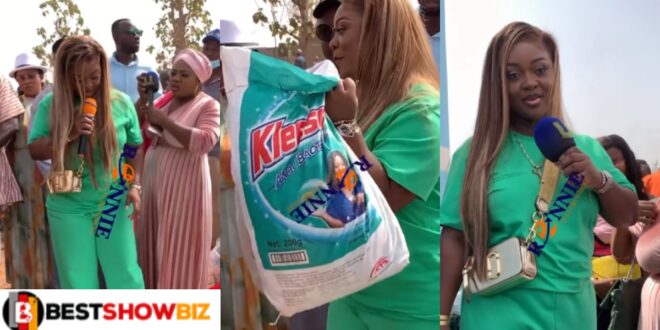 Jackie Appiah, a well-known Ghanaian actress, decided to spend her birthday with a less fortunate community in Ghana’s Northern Region.

Jackie Appiah has made it a habit to donate on her birthday every year, but this year, she traveled to the northern part of the country, Tamale to be exact, just to put smiles on the faces of some people.

The actress and her team traveled to Northern Region on Sunday, December 5, 2021, to donate items to the students of Kogni MA Primary School in Tamale.

She distributed items such as school uniforms, stationery, toiletries, and other miscellaneous items.

Not only did Jackie Appiah distribute these items worth thousands of Ghana Cedis, but she also presented the community with a newly constructed borehole to provide clean drinking water.

Jackie Appiah, who spoke at the borehole’s commissioning, stated that water is life and that she came to the aid of the people of Kogni after learning that the community in Tamale lacked such a basic amenity.

According to residents, the borehole arrived just in time and was the best Christmas present they had received this year.

They thanked the actress and emphasized that she had solved one of the community’s most pressing issues, the lack of clean drinking water.

As a token of gratitude, the community presented Jackie Appiah with three Guinea fowls and yam tubers from their chief.